During summer, tourists usually ask where is the best beach in Split but it is really hard to choose just one as a favourite. Every beach in Split is in its own way special and we love every one of them. Check out our top 5 pick of beaches in Split and see which one suits you the most!

Bacvice are definitely the most popular beach in the whole city. We could say that Bacvice Beach (also known as Bace) is one of the symbols of Split. It is special for several reasons. First one, it is the the closest beach to the city centre, only 5 minute walk from the main bus station, so reaching the beach is quite simple. Although it is not the only sand beach in town, it is definitely the biggest which makes Bacvice perfect for playing “picigin”. Picigin is popular ball game played which originated in Split and the only rule of the game is to prevent the ball from falling into the sea. By night, the waterfront near the beach becomes a popular clubbing spot for both locals and tourists. Bacvice Beach was also the first beach in Split which got awarded with the famous Blue Flag (beaches with high water quality standards).

Kasjuni Beach is located on the westernmost part of the city. The beach was completely renewed in 2016 and now you can find there numerous sunbeds and a beach bar which becomes a club during night. It is very popular among both locals and tourists. The beach now looks much cleaner, it is easier to access the water and the pebbles in the sea are much smaller which is ideal for families with children. Also, here you can find a popular nudist area.

Only 1,5 kilometres before Kasjuni Beach is located another pebbled beach, one of the most  favourite city beaches among the locals. It is easy to access by car and you can also get there by foot from the city centre in 15 minutes. The beach is known as Kastelet among the older residents, but it is popularly called “Obojena” (after the famous bar on the beach called Obojena svjetlost). Unfortunately, the famous bar has closed down recently and it is still unknown what next is going to replace it. This beach does not offer too much extra activities (especially for children) so if you want something more besides only swimming and getting tan, you might consider choosing some other beach, but in the wider area you can find a bar and a water polo court.

Znjan is located in eastern part of Split and  it is easily accessible by car because it has a big parking lot which makes Znjan perfect for bigger families. There is also a mini-park for children with trampolines and bouncy castles and open café bar where the adults can relax. The beach is currently being renovated since the most of the bars and restaurants on the beach were illegally constructed. Still, there are a few bars left by the beach. You can get to Znjan Beach from the city centre by bus line 8 or 15. 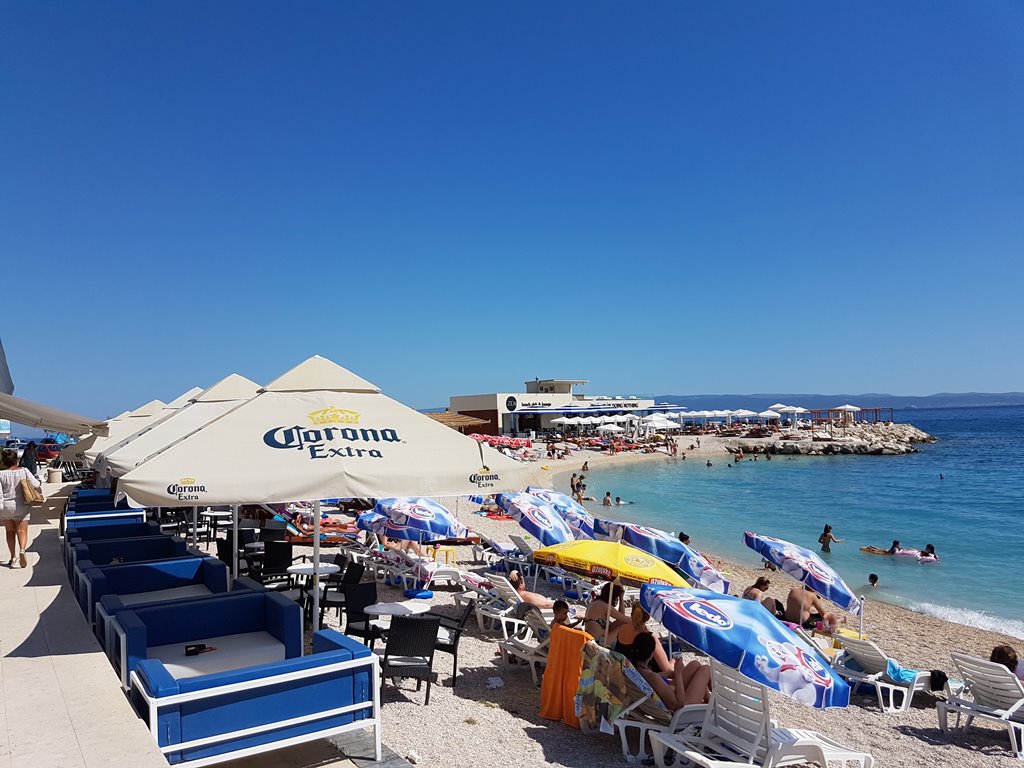 Although not as accessible as the other beaches (because it is situated on the western part of the Marjan hill), Bene Beach is very popular. The fact that it is one of the rare beaches which has pine trees where you can hide from hot summer sun, makes Bene even more popular. The beach is well equipped with showers, trash bins,a restaurant, tennis court and a playground for children which makes Bene perfect for spending all day on the beach. You can reach Bene from Riva by taking bus line 12 (the same goes for Kasjuni and Kastelet).