Milan Bergamo Airport BGY is located in the centre of one of the most industrialised and populated regions of Italy, with over 9 million inhabitants who can get to the airport within 90 minutes.

Milan, Bergamo and Brescia are a few kilometres away from the facility, accessible by an efficient road system.

How to get from Bergamo airport to Milan

The timetable of departures can be found in the table below:

The bus to the train station of Bergamo, (the bus number 1) runs from outside Bergamo airport to Bergamo train station situated in Piazza Marconi.

The bus stops close by several of the hotels in Bergamo such as The Best Western and San Marco.

Although Bergamo airport does not have a direct rail link, the train station in Bergamo is within easy reach of the airport and only takes 10 – 15 minutes on the Bergamo bus.

During the summer season the queues can be quite long and you can easily wait up to thirty minutes, although when it is busy there is usually a security guard organising the taxis.

Another way to travel to Milan is with a private, door-to-door transfer from Bergamo Airport to your accommodation in the city.

You can also pre-book a transfer to almost any city in Italy from Airport Bergamo that you would like to visit for a hassle-free experience.

You will find a list of the most popular transfer routes from Bergamo Airport below where you can pre-book your private transfer and pay on arrival.

Renting a car at Bergamo airport

If you prefer reaching and exploring the city by yourself, you should rent a car online or do it on the spot: most of car rental companies like Goldcar, etc. are situated in the airport area.

Compare their prices and book your car online.

From BGY to Brescia: There are up to 12 daily departures from Bergamo airport to Brescia.
The journey takes 1h and costs approximately 12€.

From BGY to Milan: There are many departures a day from Bergamo airport to Milan.
The journey time is 1h and one single ticket costs approximately 5€. 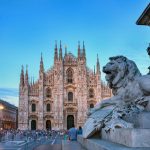