How to get from Bologna Airport to Bologna

Travelling to and from the airport is easy, but there is only one bus to choose from. You can board at the Central Railway Station (Stazione Centrale).

There is a shuttle service run by TPER taking you from the arport to Maggiore Hospital within 20 minutes. Buses depart about every 20 minutes to and from the airport. You can check the current timetable here.

The bus makes a stop at stations Santa Viola, Pontelungo, Triumvirato and Birra, useful for interchange with other lines of the urban and suburban bus network.

Tickets can be purchased online, from the vending machines in the airport, and in Bologna at the station or at the TPER ticket offices. One-way ticket from/to the Airport €4.00.

Reduced service is available on some public holidays like e.g the 24th, 25th and 31şt of December and on the 1st of January.

Trains depart every 7 minutes to and from the airport at peak times and every 15 minutes during off-hours.

Tickets can be purchased online, via Roger app, from vending machines at departure stations and ticket offices located at the airport and in the city centre.

A regular one-way ticket costs around €9, but you can choose between a family ticket (€18) and group tickets (€7 per person/10 passengers).

In case you have a lot of baggages and wish to book a cheap door-to-door transfer, you can do it online both from and to the airport. Transfers can be booked for any number of persons. From a price perspective private transfer is fairly expensive if you are only a few people, but depending on where you are going to it could be the cheapest solution if you are more people travelling together. When you book a private transfer, the driver will usually await you in the arrival hall with a name sign.

There are several taxi companies offering a transport from city centre to the airport. Weekday fare is about €15,00  + €0,50 extra per baggage item, while during the holidays the price is €18,00  + baggage costs. From the 5th person onboard, the cost of €1,00  per person will apply. NOTE: the prices may vary due to traffic conditions.

Renting a car at Bologna Airport

There are 11 rent-a-car companies available at the Bologna airport, all located at P3: Avis, Autovia, Budget, Hertz, Goldcar, Locauto Rent, Europcar, Maggiore, Noleggiare, Sicily by Car and Sixt. Here you can compare prices and book in advance to avoid the possibility of overbooking or long waiting due to the crowd. 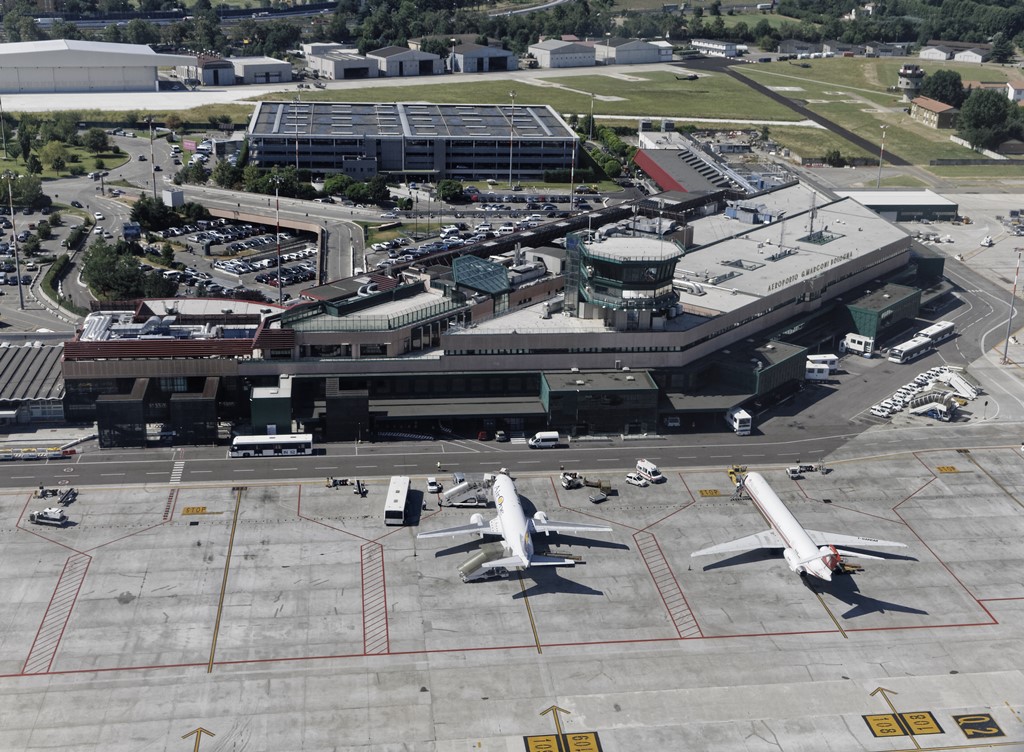 Renting a bus at Bologna Airport

In case you are arriving with a large group of people or find some people you want to share your transfer with, you might consider renting a bus prior to your arrival. Buses are offered by several bus rental companies in the area.

Bologna is served by many public bus lines and ‘’navette’’ (small buses). By them you can visit some out of town destinations like Imola, San Lazzaro and San Luca. The price is €1,30  per ticket valid for 1 hour, €5,00  for a day ticket and €12,00  for 10 tickets valid for 75 minutes. From the Bologna bus terminal you have departures to many italian cities like e.g. Florence, Rome or Venice just to mention a few. Also from the bus station you departures to many international destinations. As alternative to the bus you can also take the train, connections from Bologna you can check here.

From BLQ to Florence: There are up to 10 daily departures on the route from Bologna airport to Florence. It takes 1h 25min to reach Florence and one single ticket costs around €20.

Yes, there is a Hotel Bologna Airport (****), situated 3.5 km from the airport, the hotel has a shuttle service to the airport.

I would like to spend one day in Bologna in between flights. Is that possible?

Yes, of course. The best way would be to take the airport shuttle bus to reach the city centre. Buses go every 11 minutes and you will reach the city centre in less than half an hour. In case you want to leave your luggage somewhere while exploring the city and you don’t have a hotel, you can do it at the airport. Located at the first floor of the main terminal, inside Security Staff Entrance Luggage storage is also available 24/7. The price is 6,00 € per item per day, and for luggage or objects out of gauge, the service costs 12,00 € per day.

I am continuing my journey outside Bologna. Are there any direct lines from the airport to other cities?

Yes, there are schedule Shuttle bus lines that connect Bologna to the cities nearby, such as Ravenna, Florence, Ferrara, Modena and Rimini. Unfortunately, the information about departure time and exact departure location is a bit hard to figure (Webpages with information partly only available in Italian) but a at least you have an overview of the connection options here.

Yes, there are several exchange offices and ATMs at the airport, working 24/7, but it would be better to exchange the money before the trip and have some euros on you since the rate will be a lot higher on the spot.